LAHORE, Pakistan — A Christian bicycle mechanic in Lahore, Pakistan, was sentenced to death last week on baseless charges of blasphemy, his lawyer said.

Attorney Riaz Anjum said that in 2017 Muhammad Irfan had asked Ashfaq Masih not to charge him for a bicycle repair because he was a devotee of Muslim Sufis and saints.

Police subsequently arrested the 36-year-old Pentecostal from Lahore’s Green Town area, accusing him of disrespecting Muhammad, the prophet of Islam, by allegedly saying that Christ was the only “true prophet.”

Masih has testified that he was framed on false charges by the complainant in the case, Muhammad Ashfaq, who is the landlord of his shop, and Muhammad Naveed, who runs a nearby bicycle and motorbike repair shop. Masih told the court that Naveed was jealous of his success, twice had tried to pick fights with him over clients and nurtured a grudge, the lawyer said.

“Muhammad Ashfaq had been pressuring Masih to vacate the shop, ignoring the latter’s pleas to not displace his running business,” Anjum said. “Masih believes both Ashfaq and Naveed conspired to implicate him in a blasphemy case by using Irfan.”

Anjum said he told Additional Sessions Judge Khalid Wazir that the First Information Report (FIR) contained no words indicating that his client had committed blasphemy. The complainant claimed in his police statement that when Irfan told him that Masih was committing blasphemy, Ashfaq and some other Muslims went to the Christian’s shop and saw him insulting Islam’s prophet, yet “nowhere in the recorded testimony or FIR is there a mention of the alleged blasphemous words,” Anjum said.

During the trial, Irfan did not even appear to testify as the prosecutor “gave up” the primary witness who was the most relevant to the case, Anjum said.

“The prosecution presented only two out of the total five witnesses during the trial, and even their statements were contradictory,” he said.

The attorney said that the judge disregarded his pleas to give the benefit of the doubt to Masih as there was no evidence against him, “but the judge handed Masih the death sentence” on July 4.

“Ashfaq’s daughter was 3 years old when he was arrested [five years ago],” he told Morning Star News. “We don’t know how much more time she will have to wait to be with her father.”

“Everyone knows that trial courts give death sentence to all those charged under Section 295-C, even if there’s no proof against them,” he said. “We were mentally prepared but still hoped for a miracle. My brother was very sad and disappointed when the court announced its verdict and asked me what we will do next.”

He replied to his brother that they would go to the highest courts to win his freedom, and that he should not give up hope, Mehmood Masih said. The family has hired former Pakistan Bar Council Vice Chairman Abid Saqi to file an appeal against the conviction in the Lahore High Court.

Behind bars for five years due to a series of adjournments, Masih was briefly released in 2019 to attend his mother’s funeral.

Sajid Christopher of the Human Friends Organization said his rights group would bear the legal cost of the appeal.

“I’m extremely disappointed by Masih’s conviction,” Christopher told Morning Star News. “We have assured the family that we will support them in courts and all other forums till the release of their loved one.”

Blasphemy accusations in Pakistan often provoke mob violence and lynching of suspects, while penalties are light for those who make such false accusations.

“It’s clear that trial court judges are saving their own skin by shifting the burden of justice to the high courts,” Marshall told Morning Star News. “They know very well that 99 percent of blasphemy cases are made to settle personal grudges, but still they convict the innocent, forcing the poor victims to spend many more years in jails waiting for their appeals to be heard by high courts.”

The trend of fake accusations of blasphemy is a serious threat not only to Christians and other minorities but to the Muslim majority, he said.

“The government must legislate against the misuse of the blasphemy laws,” Marshall said. “Many people have succumbed to fake allegations, while thousands of others are languishing in jails for years. This needs to stop now.”

A number of people have been sentenced to death in Pakistan for blasphemy. In January, a Rawalpindi court sentenced a Muslim woman to death after finding her guilty of insulting Muhammad in text messages she sent to a friend. The woman, Aneeqa Atteeq, was arrested in May 2020 after a man told police that she sent him blasphemous caricatures via WhatsApp; she was sentenced to 10 years in jail.

In December 2021, a mob descended on a sports equipment factory in Sialkot, lynching Sri Lankan Priyantha Kumara and burning his body publicly over allegations of blasphemy.

The incident drew nationwide condemnation, and authorities arrested dozens of people over involvement in Kumara’s killing, but there has been no legislation to stop such fake allegations.

Pakistan ranked eighth on Open Doors’ 2022 World Watch List of the 50 countries where it is most difficult to be a Christian. The country had the second-highest number of Christians killed for their faith, behind Nigeria, with 620 slain during the reporting period from Oct. 1, 2020, to Sept. 30, 2021. Pakistan had the fourth-highest number of churches attacked or closed, with 183, and overall.

Morning Star News is the only independent news service focusing exclusively on the persecution of Christians. The nonprofit’s mission is to provide complete, reliable, even-handed news in order to empower those in the free world to help persecuted Christians, and to encourage persecuted Christians by informing them that they are not alone in their suffering.

7 reactions to the death of Ivana Trump 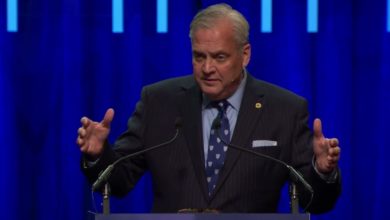